.
Hong Kong is like toy heaven to toy collectors, with dozens of toys stores and several buildings filled with hundreds of "cubicles" of individual sellers, for a country that has a population and land mass that is only a little more than Sydney.

From several trips to Hong Kong, this is a top 20-ish list of best locations to find toys when visiting Hong Kong, with maps and details.  (rankings are purely subjective)
This guide covers locations closest to the harbour, on both sides, and the airport.  (maps copied from google maps)
There may be other stores in other parts of Hong Kong, including ones that deserve to be on this toy guide, and will be added when they are known or visited.


First up, the list of the best places to visit.
The MUST GO TO places for toy fans.
1 - Wan Chai "Toy Street" (about 7 toy stores all next to each other, with some of the best, competative prices in HK)
2 - Toyzone, Shau Kei Wan (was at Taikoo - HUGE store that sells other people's toys as an agent)
3 - ToysRUs Ocean Terminal, Kowloon (one of the biggest TRU stores I have seen, and always with a HUGE range of Transformers toys)
4 - Ins Point, Yau Ma Tei (about 3 floors of cubicles of toy/game/collectable sellers)
5 - Sino Centre, Mongkok (first four floors of cubicles of toy/game/collectable sellers, plus toy stores in 3 or 4 of the floors above, including HobbyBase)
6 - Whampoa (Wonderland, Aeon, ToysRUs)
7 - Play N Go, Terminal 2 Airport (expensive, but always has rarities)
8 - Action Robo, Yau Ma Tei (mostly unlicensed 3rd party toys)

The lesser priority locations, but still worth checking if you have the time.
9 - Causeway Bay (Sogo, ToysRUs)
10 - Richmond Arcade, Mongkok (about 3 floors of cubicle sellers - not as good as it used to be)
11 - Tiakoo (Apita, ToysRUs)
12 - Oriental 188 Centre, Wanchai (a few cubicle sellers of toys and collectables)
13 - CTMA, Mong Kok (used to have several toy stores, but now just one left)


HOW TO FIND THEM (two main maps of Kowloon and Hong Kong Island, plus smaller maps showing exactly where the stores are). 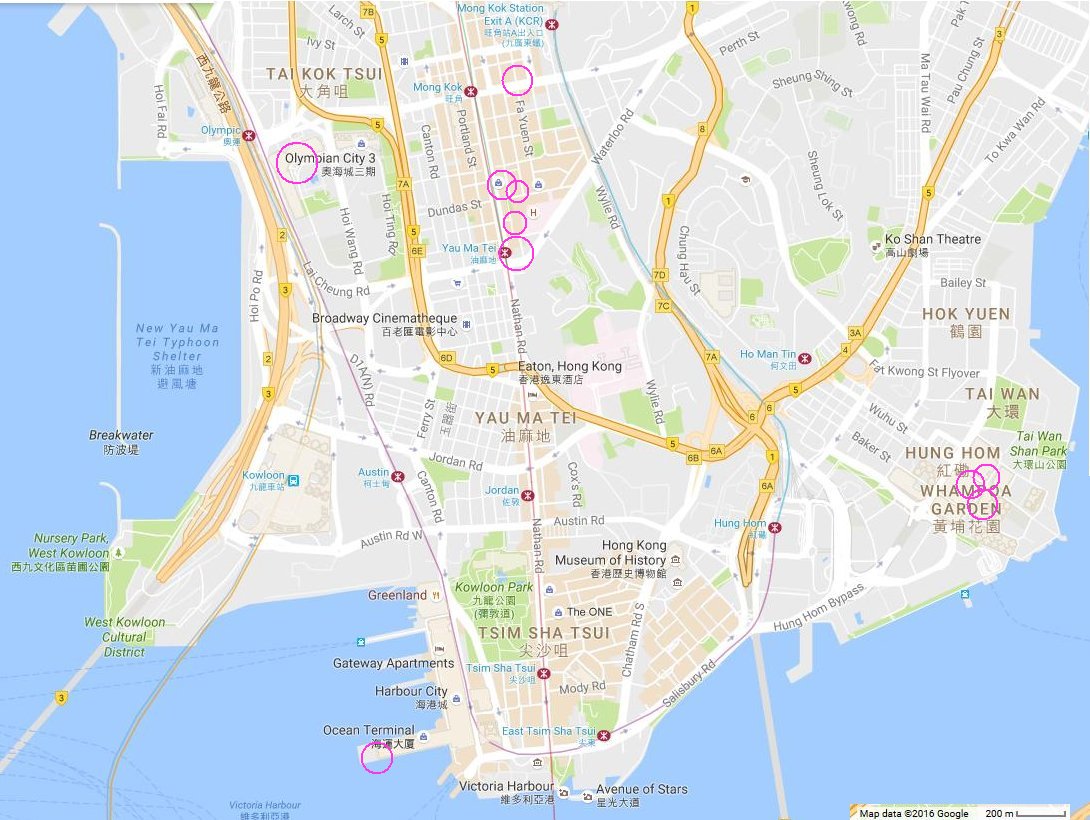 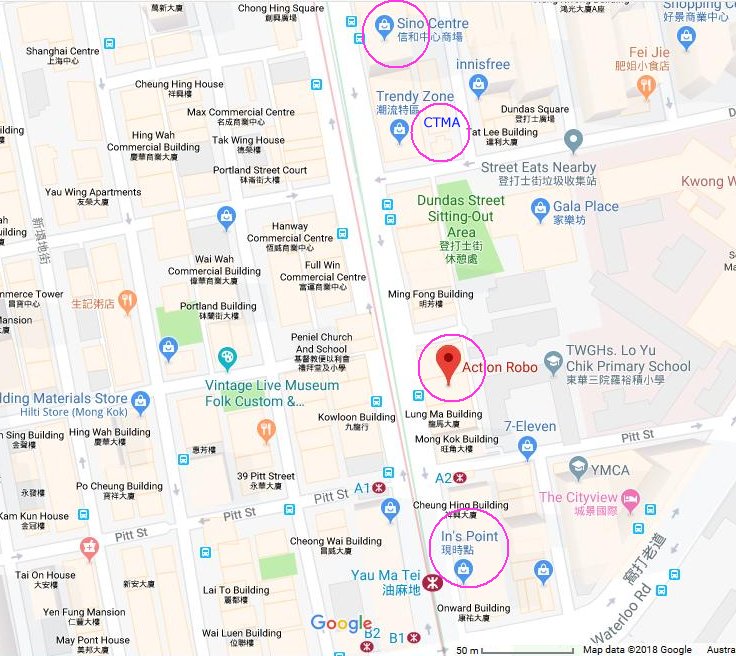 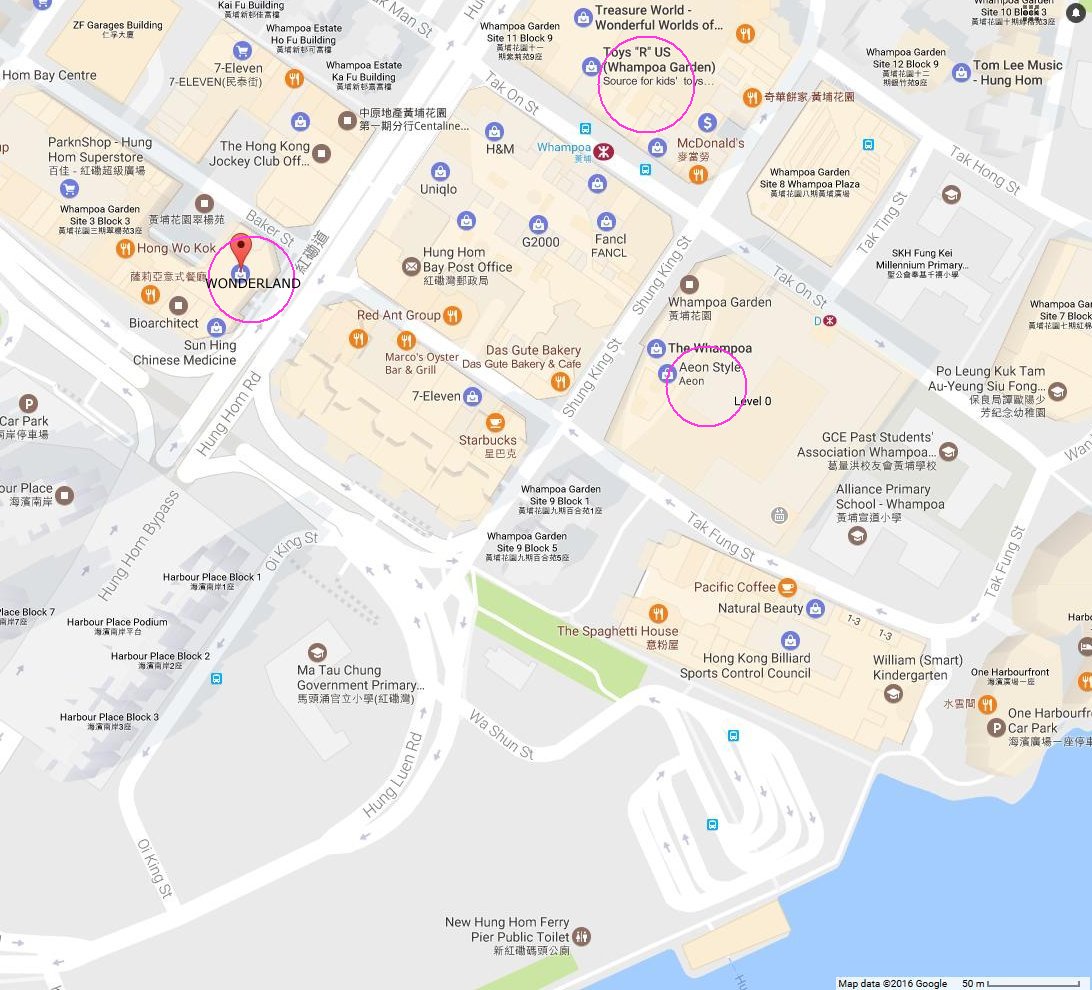 Wan Chai stores
- Tai Yuen "Toy Street" with a KFC at the entrance (mostly 10am to 8pm - best ones are Hung Hing toys (left side of store), Freeway toys, Gifts & Toys (both sides) - not so good is Yat Sing toys)
- Oriental 188 Centre (on Wan Chai Road to the east of the Wan Chai station - I can't remember details). 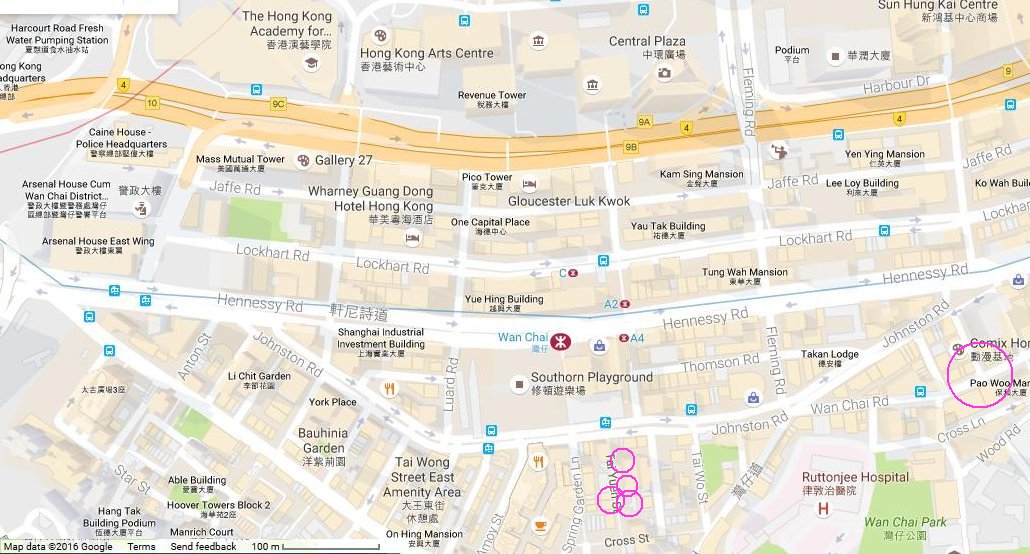 Causeway Bay stores.
- Sogo (the toys department is on the 6th floor - a more expensive, up-market store so only buy here if you can't find your items elsewhere)
- ToysRUs (on the 7th floor - this shopping centre often has seasonal and feature promotions) 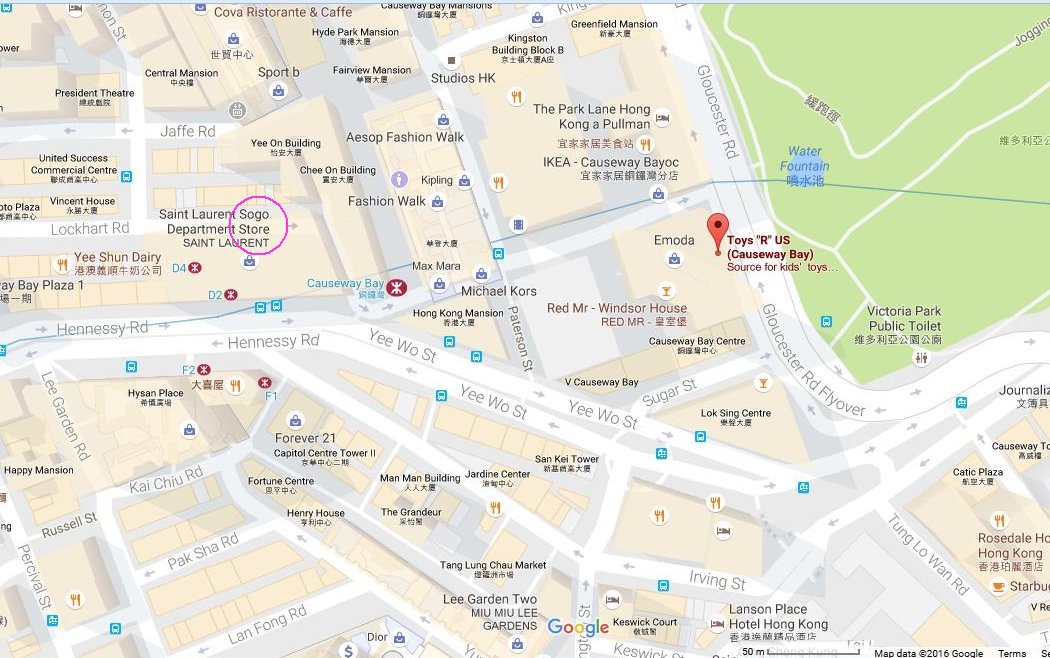 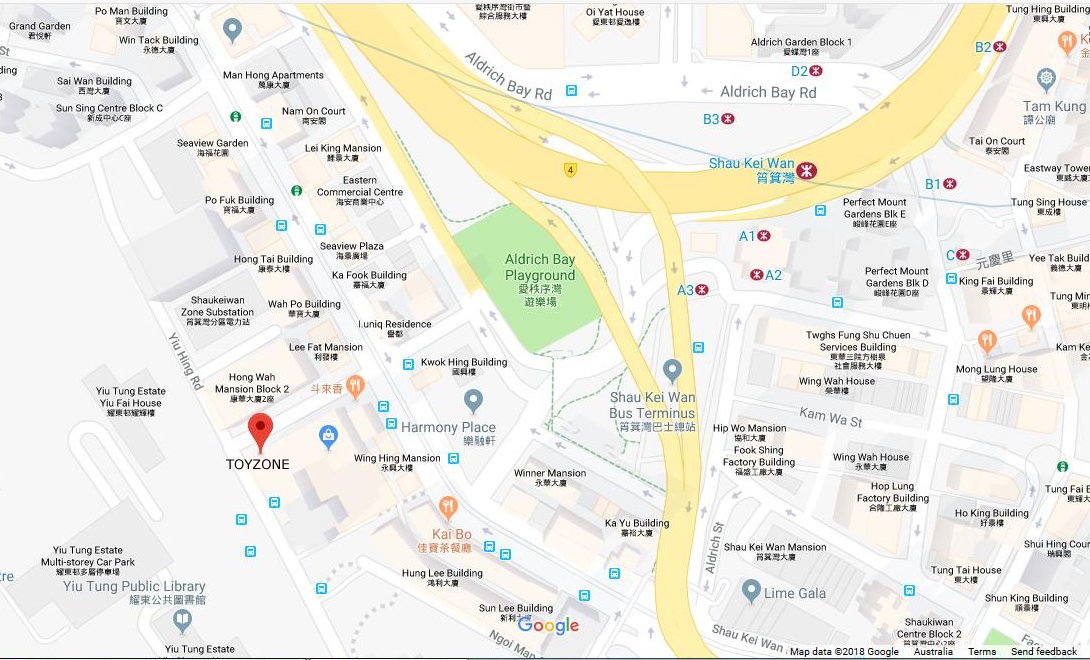 Taikoo stores
- Apita (department store with a small toy section)
- ToysRUs (a small store)
(Toyzone used to be in this area as well, which used to make this a much better stop on the train line for toy hunting) 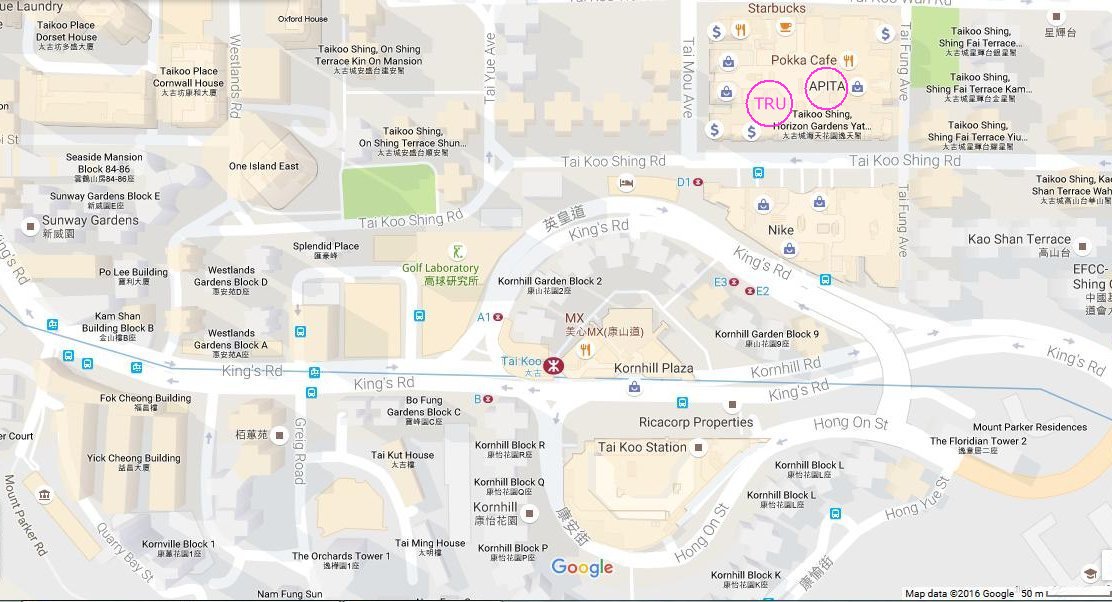 Central ToysRUs (a very small store, but is between the two train lines I use to get to or from the airport, for last minute or first night purchases, as it closes at 8.30pm) 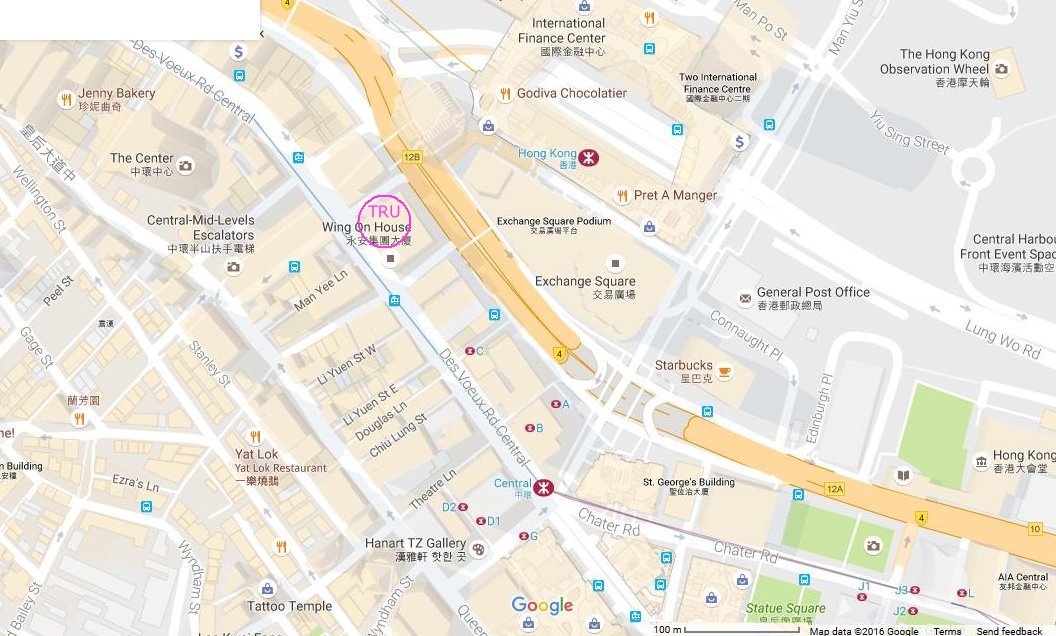 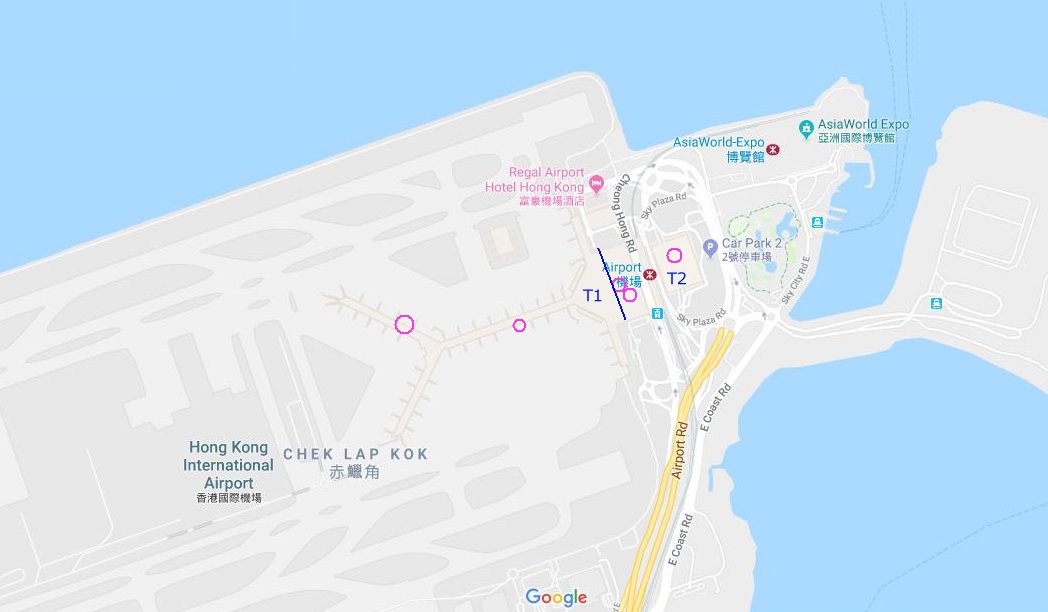 To contact me to make additions or corrections --> griffin @ otca.com.au
....